“Muhammad is the messenger of Allah. And those with him are ruthless against the disbelievers and merciful among themselves.” (Qur’an 48:29) 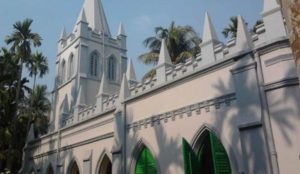 “Catholic woman is the victim of violence by two Muslims,” by Sumon Corraya, Asia News, February 19, 2021 (thanks to The Religion of Peace):

Barisal (AsiaNews) – A 43-year-old Catholic mother of one has accused two Muslims of rape.

Rumi Costa (not her real name) lives in the Diocese of Barisal. On 5 February, she was attacked in her home and had to be hospitalised until last Wednesday because of the injuries sustained during the incident.

Her husband, Fabian Gomes (also not his real name) filed a complaint on 8 February at Bakerganj Police Station against Mohammad Alam, a neighbour recognized by the woman, and one of his friend.

Gomes works as a night watchman at a Catholic school and his only son is in Dhaka studying, which is why his wife was home alone at the time of the attack.

When he returned home the next morning he found the door open and his wife on the floor, undressed and unconscious.

Mohammad Alam and his friend managed to get into the house by picking the lock. “With their faces covered, they looked like thieves,” Rumi Costa told AsiaNews, “but instead they wanted sex and started beating me up.”

“As I tried to disentangle myself, I recognised Mohammed Alam’s face. They kept beating me; I was scared and helpless. I asked for some water and they gave me a glass mixed with a sleeping pill that made me unconscious for three days.”

The woman is still weak and bears the scratch marks of the attackers on her body. The two also stole her gold earrings, but according to Costa they only did it to humiliate her.

Bakerganj police arrested Alam, but his accomplice is still on the run. The woman did not obtain a medical certificate attesting to the sexual assault.

“Alam thought that since we were very weak Christians we would not raise our voices,” she said. Now she wants justice.

Her husband told AsiaNews that they live in a predominantly Muslim village. Right after the incident, neighbours showed their solidarity and denounced the attack; but when Gomes filed the complaint local Muslims sided with Alam, claiming he could not have done it.

“His brothers also offered me money to withdraw the complaint, but I told them that I want punishment for the attackers,” he said….